I’ve been playing around with Nate’s Rhynamo stuff for a while now, and I have to say it’s pretty awesome. So when I saw that Autodesk had released plugin for Dynamo that would interface directly with Robot Structural Analysis it got me thinking… can I get some data from Rhino straight into Robot? I thought I’d test it out with this nice simple structure:

This is the original model of the 2013 Serpentine Pavilion in Rhino.

This is the Dynamo definition to get data from Rhino using Rhynamo and then into Robot using the new plugin. 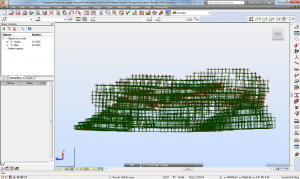 and finally the Pavilion structure in Robot!

The idea of being about to manipulate Robot geometry and get results directly in Dynamo is rather appealing.

It took me a while to work out what was going on but once I got it, it was really quite simple. Like all good little engineers, I started off by making sure it was doing what I thought it should, but this didn’t quite go to plan, so here is a brief run down of the good, the bad, and the ugly:

This is a really early release so I don’t want to be too critical as I would love for this to be developed further by the authors. However: 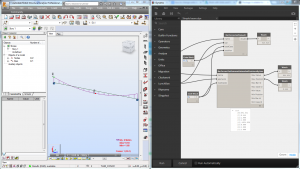 I like that Autodesk are going down this route. Dynamo is a massively powerful tool and being able to use it to manipulate data in an analysis package is excellent. Personally I’m not a massive fan of Robot – I’ve never used it in earnest and I find it quite difficult to perform relatively simple tasks. However, this all goes to make the potential of this plugin even better. Imagine being able to use Robot to do your analysis within the Dynamo environment without actually having to use Robot!

My hopes for the future:

So, if you are a Robot user, or even if you aren’t, I recommend taking a look at this plugin. Remember to bear in mind that it’s early in development, but there’s nothing to stop you poking around and getting involved in the development.

Check it out here: Robot Structural Analysis for Dynamo.

Here are a couple of examples:

This is a screenshot of the example from the Autodesk website, only slightly more legible than in their video.

And here is my version of it, with a few tweaks to make it into a Pratt truss.